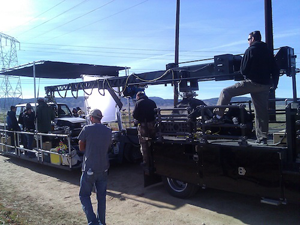 I had 2 shoots this last week. One was an industrial for Bank of America. The production company was out of Chicago, super nice guys, and they had a good budget and paid people well.  AND they did a Starbucks run every afternoon and ordered whatever we wanted.

I asked the production team to email me the storyboards. They emailed over the pre-production book right away. I see some crazy shots and moving around and start to get into ‘I better get to work on this’ mode.

I called the production manager and asked to speak to the 1st AD. She warned me, “This guy’s bark is worse than his bite.”

Hmmm, great. We speak on the phone, he gives me the low down on what’s going to happen and it’s going to be some long and hard days. He said to “Just be ready.”

Production is never a cookie cutter formula. Basically, there’s the shots that the Director has come up with, and how we’re going to get those shots, the logistics of actually shooting all those shots in a day. Sometimes it feels like a miracle that everything comes together.

Now, this production company is a very high end one. They do BIG Superbowl spots and have huge budgets. The owner of the company was the director for this shoot. I’d never worked with him and obviously wanted the day to go well because I’m always looking for new clients.

Friday, I got up at 3 am and drove two hours to the desert where we’re shooting for the day. I arrived in the dark at base camp where people were having breakfast in the dark and starting to set up for the day. We were working in the dark as fast as we could because once the sun came up, we’d go to take off on the road on this process trailer and would not come back to base camp for a while.

I could feel a nervous energy as people were very focused and working fast. Soon that boiled over. The 1st AD starts screaming ‘WTF!!! This is BULLSHIT! You tell Wardrobe that we NEED to see the actors FIRST!!!”

You just don’t hear people talking like that much in this business. Usually, people are polite and focused on getting the job done. We understand that people work better without the screaming. In fact, people like this are usually filtered out of the business…. or found on lower budget shoots.

I kept in mind that I had to work with him no matter what. He’s the 1st AD in charge of running the set, keeping people on schedule and giving out information so everyone can do their job and are prepared.

So, the day continued. There were little problems that came up in all departments, something very common on big sets, and he screamed and yelled every time. Big booming voice. The Director however was nice and polite and very focused on directing the actors.

While we’re out on the road, I have a technical problem that comes up. He’s breathing down my back. “IS IT FIXED YET? IS IT FIXED?”

I’m like “no we’re working on it.” He glared at me, but I was calm and in control. There’s no benefit to matching that kind of energy.

We fix the problem and the shoot continues. I’m like “Whew! Glad that’s over” and start to beat myself up a little, then I stop and realize, “hey, these things happened.  it’s fixed and everyone has moved on.”

Lesson #2:   When shit hits the fan…and you’re directly involved, LET IT GO. Everyone else has. The most important thing is how you handled the situation, your ATTITUDE and outward appearance. Stay positive and in control.

Well, we shot until 7 pm. 6 am to 7 pm. Long day. We had so much to shoot we worked right through lunch. That NEVER happens! The PAs took our lunch orders and we got them delivered to us as we’re working. I got cold filet mignon with potatoes and asparagus. Still tasted good!

After we wrapped, I went into the production motorhome to talk to the 1st AD to be prepared for the next day. There were like 10 people standing in there… talking, discussing the next day. I asked the production manager for tomorrow’s shot list and we looked at them together. He just says “Here are the shots, just be ready.”

But I need more information, “Where is the Director going to be during this shot? Where is VTR? Are we shooting this shot on the process trailer? On the camera car? Where will the camera be?”

He tries to answer some of the questions, but honestly I think he doesn’t know many of the answers. He just kept saying to be ready.

The next day we’re shooting in downtown LA.   A huge crowd of tourists watch and take pictures of us all day long and asking questions.

We were shooting on this street with talent in a car on the process trailer, driving down the street in LA with 15 precision car drivers racing by. Lots of cars moving around us on the street. This can be dangerous if you’re not paying attention!

All this and still not much information from the 1st AD. Nothing has changed in that department!

It wasn’t just me, ALL the departments were having trouble finding out what was going on. People set up equipment and stand by.  Many people are disgusted.

This was a tough day, made so much harder because the 1st AD was not giving us the information we needed. This forced me to go to the Director himself and the script supervisor to find out about upcoming shots so I could be prepared.

And the problem with this was that I was probably pissing off the 1st AD.

Lesson #3:  You MUST maintain a good working relationship with the people around you. Not only for the shoot you’re on, but for future shoots. You never know when you will work with them again!

I made several mistakes. When each problem occurred, I would simply say “I’m on it!” and take care of it.

Sure, there’s stress, but that’s to be expected. Look, we’re shooting a $1 million dollar commercial, we’re trying to fit a TON of shots into a short period of time, 6 am to 6 pm…. you lose the light at 5:30 pm. And the day got more hectic as the possibility of not getting all the shots became a real concern.

We end up getting all the shots, and the day is over. Did it go perfectly? No. But did they get what they needed in the can? Yes.

In the motorhome at the end of the day, the Producer comes up to me and says “Thank you very much. We’re definitely going to call you again.”

The Director tells me “Good job!” and smiles.

Lesson #4:   Things won’t always go perfectly… but if you are trying hard and have a good attitude… people will notice and you will get hired again.    I believe the Producer liked that I worked very hard to be prepared.  He saw me fixing problems calmly. We got what they needed for the shots.

So, that was the shoot. I was exhausted… but felt good that I pulled it off and may have picked up a new client.

This situation of a difficult 1st AD isn’t the norm. In 15 years, I haven’t seen anything like this, but I wanted to relay the shoot to you so that you can learn from it and stay calm.

The great thing is this company does BIG and high profile shoots. They are great to work with. Love the Director and Producer.  They are the ones who hire me. And the next shoot probably won’t be as hard.