HOT set, in more ways than one

Whew! What a great week! I had two jobs this week, a one day shoot along with a three day shoot.

The 3 day shoot was in Van Nuys, Beverly Hills, and downtown Los Angeles. The Director was so frickin’ nice! His entire production team was too. The producer was a backpacking, kayaking cool woman, and the production manager was a smart, sassy, cute woman who is married to the 1st assistant director. He’s a sweetheart too!

I only have 1 picture from that shoot which a PA took of me because he liked my necklace. Here it is: 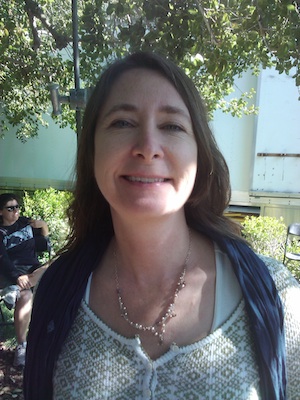 He makes jewelry so he wanted to replicate it. Cool!

We were standing next to the craft service table (Where else would we be! She had just made fresh guacamole!). This job was quite laid back and fun, not much stress, just do the job and get ‘er done!

OK, now the Palm Springs one day job was …. interesting.

I’ve worked with this company for years. They are a high profile company with big time directors who’ve all worked on HUGE feature films.

The shoots have an entirely different feel. First of all, the director this time was very nice and normal guy. He wore a grey T-shirt and jeans.  Nothing fancy, I was like “that’s the Director?” but you can tell from their demeanor. A lot on their mind, and moving fast.

It was 100 degrees.  They set up pop up tents to keep people from falling over. In fact, the day before, someone had to be taken to the hospital for dehydration! We had a medic who had fans, electrolytes, everything you could imagine at a table on set.

First off, this AD I’ve known for years. Cool cat, long hair, tattoos, done a lot of livin’. Been doing this for around 25 years.

The DP also directs sometimes and I’ve shot with him before. He’s shot Schindler’s List, Saving Private Ryan, Funny People, and a bunch of other big movies. He’s a character, always yelling (joking) and showing his belly, and acting like a prima donna (joking). He’s just FUN.

He also brought his bull dog. “All she does is fart,” he kept saying. She got a nice blanket in the shade to sit on and water for the shoot.

Here are some pics from the shoot. 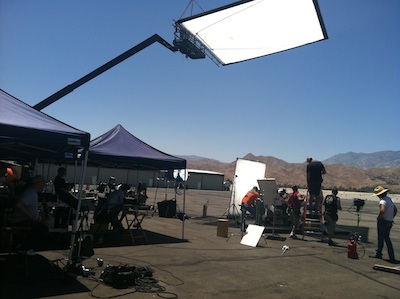 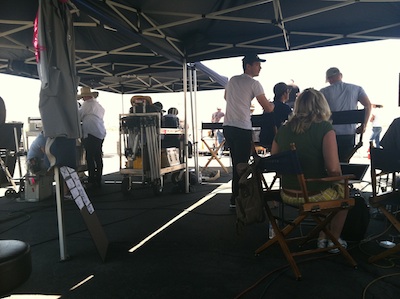 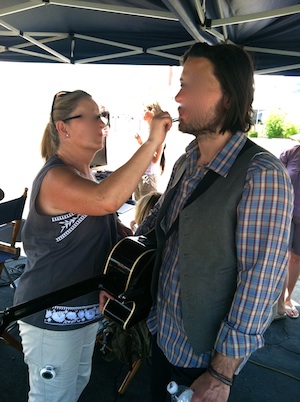 Boy, the pictures sure don’t show how hot it was.

But the fly swatter (the crane) is not a light, but a diffusion silk that cuts the sun.

Notice the reflector boards and the 2nd silk on a stand.

Finally, the actor getting make up. I have to blur the faces without having consent from them. For the makeup artist, her hardest job was keeping the sweat off his face.

The PAs were busy, keeping the coolers full of water, taking people around in golf carts (zoom zoom!) setting up pop up tents, making sure nothing blows over from the wind, just helping and being awesome.

They are going all over and people are having a good time. Nice to see. And it’s a sexy set.   What do I mean by that?

Well, it just has that feel. The DP definitely brings it out when he tries to get the Stunt Driver to show his abs and chest on set (he hid behind the Executive Producer), lots of hugging, and you just get a sense of closeness…

Enough on that.   You’ll see what I mean when you get into the business.