Wow! I love what Jesse Eisenberg said here in this interview. 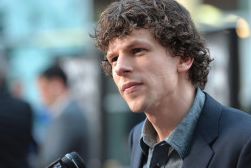 You know how you can go through a period time where things are too much for you? Where you feel nervous? and your body is on edge of being nervous?

I have felt this way. And apparently so has Jesse Eisenberg.

So, how did he deal with it? He took on a confident character. Taking on this character allowed him to do more in his real life, as he says in the paragraph below.

Although he personally would be nervous, his character wouldn't be, so he just put that person on and viola, he was able to do much more.

What a great thing to practice! We just talked about this in our mentorship program where we channel someone who inspires us, (Sandra Bullock for me) and we channel that person when we need to. It works!!!

"This is a different role than maybe audiences are accustomed to seeing you play. Was that part of the reason you signed on?

I was doing a play two years ago when they sent me this script. At the time, I was feeling a lot of stage fright and nervousness about performing every night. When I read the script, however, the character they wanted me to play was the most confident performer. I thought, "That's what I need to do. I need to force myself to enjoy performing and feel confident about performing." So I tried with this character to do everything that I didn't allow myself to do with the play. It actually provided me with a lot of relief. All the nervousness I felt about doing the the play in New York took a toll on me; this allowed me to feel not only good, but arrogant. It was like an Onion headline: Consumer confidence verging on cockiness.

Was it hard to affect that cockiness since it was so outside your comfort zone?

What do you think of this? Is it not brilliant??!!!