Working on set with CAT HERDERS

I was on this TV-spot over the weekend and it was one of the most cold and miserable shooting days I’ve ever had. Out on the plains, freezing cold, wind so strong it would catch your car door and bend it back.

The production company put everyone in a motel for the three days we were out there. Joe and I actually snuck our cat, Fred, into our motel room because he just had surgery and needed to recuperate. Fred did not like the experience, so he lived under the bed the whole time. Here’s both of our cats investigating some flowers safe at home :) 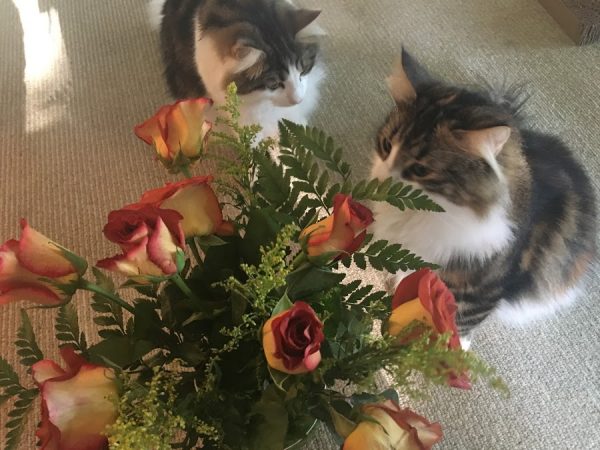 Wouldn’t you know it, there were a ton of cats on this shoot. Trucks filled with movie cats. The spot was a joke about cat herding!

They had real cowboys for this shoot, not actors. Real cowboys who had to be skillfully directed to get a natural performance.

Cats aren’t naturally good at acting. They want to be cats. But the animal trainers use clickers that make noise when they feed the cats, so the cats associate the clickers with food. That’s how you got so many cats to run down a hill to the food   (which was out of the shot).

It all worked and made for an awesome (and hilarious) little commercial. Probably one of my favorites to work on despite the intense weather!