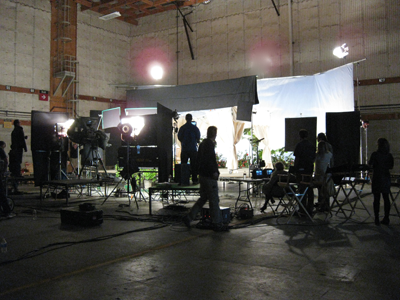 What a day! My call time was 1 pm at Sony Studios in Culver City. Then at 9 am, the Producer calls and says “Can you come in at 12 noon? They may come in early!”

I tell him no problem and drive down to the studio. By 1:30, Jennifer and Adam are walking on stage.  Adam comes first with this big balloony  sports jersey.

He’s all loud and happy! He said ‘Hey buddy, how are you doin’!’ to me. He’s really friendly even though I’ve never met him before.

Apparently, he’s put on some weight.  He says that to get his kids to do what he wants them to do, he threatens to show them his belly.

Adam has a black eye! A real black eye. Make-up tried
to cover it and but it wasn’t workin’ so they worked the black eye into the skit. He blames a co-star for hitting him in the eye.  I don’t know how he got that black eye, but I suspect a mishap with the kids ;)

Then Jennifer arrives. She looks fabulous, dressed in black. She’s fun and friendly and goes crazy over an executive’s white
furry dog which he apparently brings with him on set.

The dog is super cute and well mannered. I want to go pet him and play with him, but I have to work!

We get down to shooting. They deliver the lines so well, like you’d never know there was a teleprompter on each side of the set with their lines!

There are 3 sets on the stage. A living room set, a behind-the-scenes set, like they just walked off set and are having a real conversation. There’s also a beach set with a big umbrella and outdoor furniture.

They do their skit on our set first. Then they go to the living room set and finally end up at the beach. By 4 pm, we are wrapped.  Apparently, Adam and Jennifer have a “hard out” at 4 pm.

P. S.  I was wondering…. If you had a chance to ask Jennifer or Adam a question about acting or the business, what would it be?